This ideas competition for the reconstruction of one of Haiti’s most prominent cathedrals was launched by the diocese of Port-au-Prince. It concerns the redesign for the city’s cathedral which was destroyed in Haiti’s 2010 earthquake. To find an appropriate solution we sought to understand the geographical, economic and social context of Haiti. Cyclones, floods and earthquakes – the climatic instability of the country provokes catastrophes, amplified by the economic and social situation.

The deforestation that Haiti has suffered over the last 100 years has led to timber construction being generally unaffordable. The vernacular building typologies designed to withstand the country’s climate have therefore slowly been replaced by concrete construction with often little or no steel reinforcing. Through our research it became apparent that use of bamboo could provide the solution, not just for this project but as a structural material for Haiti in general. The use of bamboo in a project of this scale could generate interest and further research into this potential resource.

The architectural form of this projects celebrates the memory of the destroyed cathedral. Nearly 8 million Haitians are catholic, 2 million in the Port-au-Prince community, with Notre-Dame de l’Assomption as the main cathedral. Its importance over time has become cultural as well as spiritual, its significance as a monument and landmark is evident. As Haiti rebuilds from the 2010 earthquake and 2012 flooding, we propose this structure to not only be religious centre but also a framework for sheltering the thousands of citizens who are in need within the neighbourhood.

By using the outline of the old cathedral as a starting point we created a negative footprint of what was once there. A bamboo structure is developed around this form as a physical framework of refuge, inhabitation and business. The building becomes a centre for the spiritual and social renewal of the wider community. 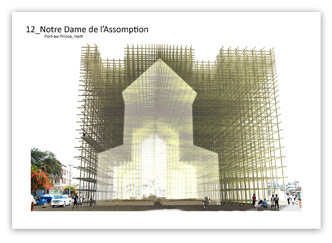